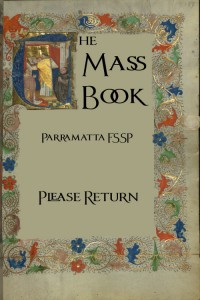 Based on Missal of Eberhard von Greiffenklau, Priest performing Mass before Two Donors, Walters Manuscript W.174, fol. 153r[/caption] Over the last Christmas holidays I made about 40 copies of the Mass Book. They weren’t too bad for cheap go at making hard cover books. Now the pages are falling out here and there and people have suggested we have a working bee to fix them up. We could carefully glue the pages back in with PVA glue, but there may be a better way… getting a new edition printed in paperback!

The draft is pretty much ready. There’s the odd suggestion for extra prayers to squeeze in, and I wouldn’t mind a plain one colour cover, but the digital book printing machines give full colour covers as standard.

The Walters Art Museum has put up a heap of Illuminated Manuscripts under a Creative Commons license - Attribution-NonCommercial-ShareAlike 2.0 Generic - which is perfect since we’re not selling the books.

So there’s the front cover above and a matching full page illustration for the back, like this Crucifixion: There is the issue of how to pay for the printing - and though it is a bit of a topic that no one likes to discuss, I think it might be worth mentioning. If we can share the cost around then there’s less chance of bitterness on any side. One Bunnings BBQ fundraiser would cover it - we would need about half a dozen volunteers for a Saturday morning at Penrith. Or ask people to sponsor a book at $7 each/3 for $20/10 for $62. Would we go for a thanks to the donor sticker inside the back cover or an “in memoriam” or just anonymous. We have copyright permission for 200 copies.

So that’s the thoughts to this minute. Back to practice for this week’s three Sung Masses!