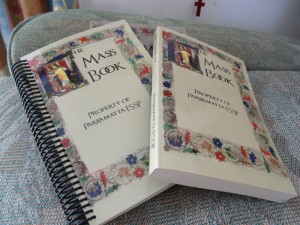 New samples of the Mass Book[/caption] The two new proof copies are in front. The older, darker version is behind. I got one spiral bound to see how it looked. The spiral is very big, but it is handy to have it lie flat. In the past I have found the spiral bound books tend to fall apart with heavy wear, but maybe a handy option for more careful choir members.

So here you can see some of the kyriale in the books. I’ve only included fifteen of the 18 Mass settings in a full Kyriale. Why not just include the full set? Well, by the time we’ve mastered the ones in here we’ll probably be thinking about new books anyway. Or maybe the Campion Missal! 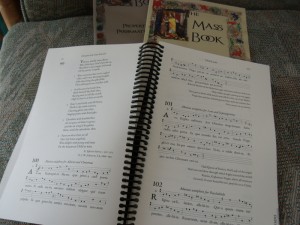 Here’s a spread from the Marian hymns section. You can see the chant in there with the regular words only hymns. Most of the hymns are just words, so to leave the choir/organist free to choose the settings they prefer - and change tunes once in a while. Each hymn is numbered for reference with a hymn board. I’ve listed sources where these could be found. Many are anonymous (when hymns were made anonymously, like cathedrals, for God’s glory, and romantic individualism was odd and uncouth - Fr George Rutler) 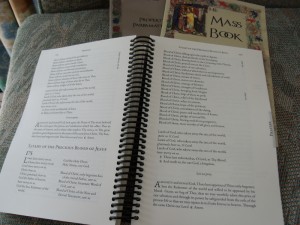 I’ve just realised I’m writing this in the wrong blog! But maybe that’s all fine. I’m having a go at raising money for the printing over at brandt.id.au. So far we have $50 towards the $1238 printing fee. I’m offering rewards for donations, or you can just chip in. This picture is from the Litanies section - one of the most challenging typologically. I was trying to emulate the Westminster Hymnal with it’s sideways responses. 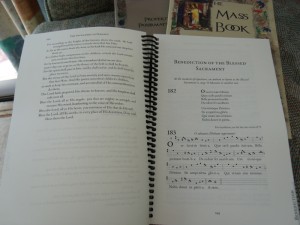 Here’s the beginning of the Benediction section. We have O Salutaris just text, followed by the most common chant setting - which isn’t very commonly sung around here, but maybe with the books we can give it a go. Same sort of thing for Tantum Ergo except with two chant settings. The regular Pange Lingua one and the Spanish or Mozarabic one. One chant setting for Adoremus too. I haven’t got any modern music notation in the books. 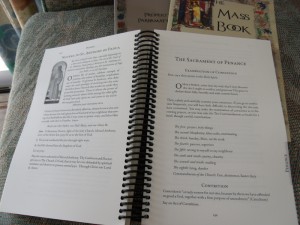 This is going back a couple of pages to the end of the Novenas section (that’s St Anthony on the left) and the beginning of the section on the Sacrament of Penance. It’s an adaptation of the St Andrew’s Missal as used in the Christus Rex Pilgrimage. Our current books at Mulgoa are missing the psalm at the end, but this version has it back in. 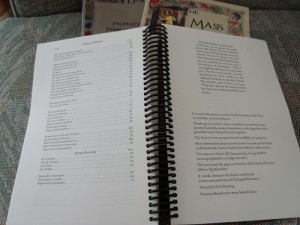 And lastly the last page of the Index and the Colophon. Thank God for automatic index generaters. I put in the Prayer before a Crucifix over the credits because a) I like it and b) there was room. I’ve squeezed in a few other prayers in the book where there was space and given them their own little index in the back so they can be found. The Memorare was in there for a while, but got pushed out when rearranging hymns.

Also, I did end up putting in our National Anthem at the back too. At first I baulked at the idea, as it isn’t a religious piece - though patriotism is a virtue - but many hymnbooks have it and it is a practical addition when so many of us don’t know it off by heart. The controversial Christian verse is included - it is not from the original as sometimes claimed, but an anonymous 20th century addition.

Update The additional verse was written by Ruth Ponniah in 1988. Article from news.com.au

The original anthem was a very British song, take this verse for instance:

which never made it into the National Anthem for some reason…